“If you can’t explain it simply, you don’t understand it well enough”.
This quote is often attributed to Einstein, but appears to have originated from someone else

Cancer occurs when cells from a person’s own body grow when and where they shouldn’t. Many things can contribute to the development and progression of cancer, but an important principle is: most cancer cells contain multiple DNA mutations, which cause them to grow abnormally.

WHAT ARE THE WAYS TO TREAT CANCER

There are many different ways to treat cancer.  There are also many ways to categorize the various approaches.  This diagram shows some of the major categories, with focus on immunotherapy. Those in green highlight are approaches which we have expertise in. 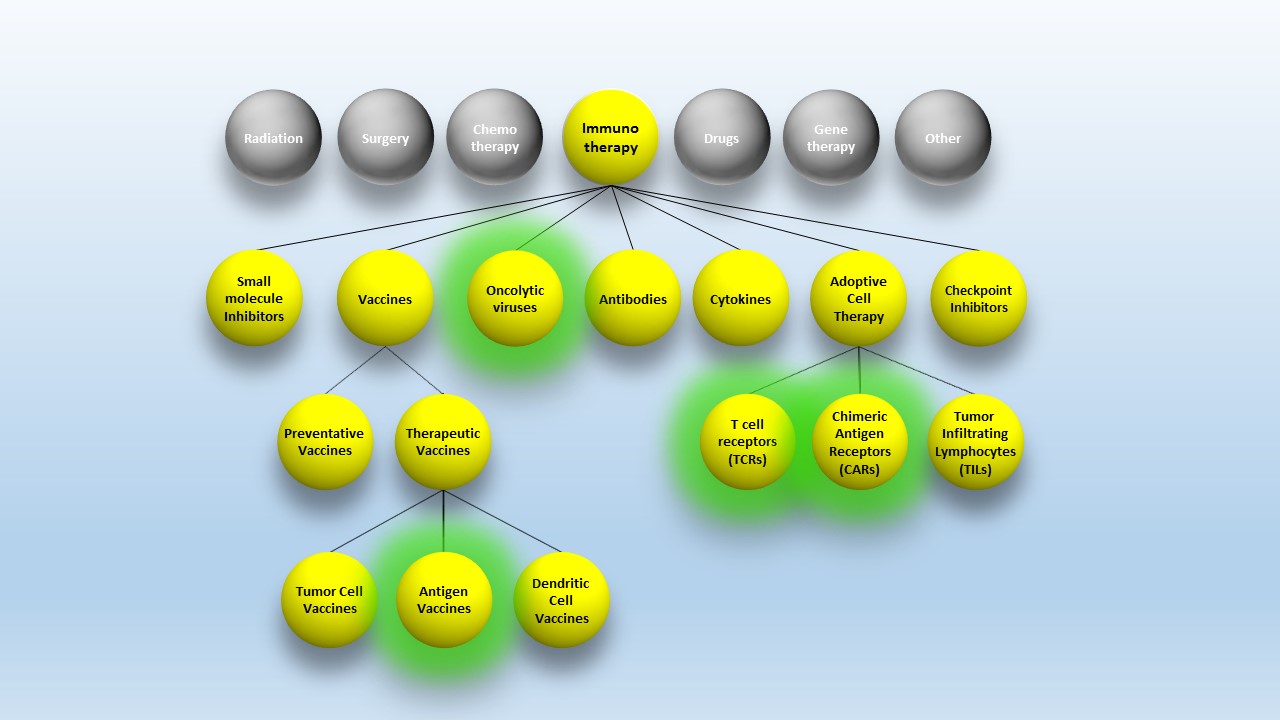 The term “immunotherapy” refers to the use of the body’s own immune system to fight disease. Immunotherapy is often used in reference to cancer, but immunotherapies are also being developed to treat other diseases, for example: allergies, multiple sclerosis and Crohn’s. Cancer immunotherapy is a term that encompasses a range of therapeutic approaches. These may include: antibodies, live viruses, vaccines and cell based techniques, among others.

WHEN DID SCIENTISTS FIRST BEGIN STUDYING IMMUNOTHERAPY AND WHY THE RECENT INCREASE IN INTEREST?

The concept of using the body’s own immune system to treat cancer has been around for a long time, arguably as early as 1891 when William Coley attempted to treat cancer patients by inoculating them with erysipelas. Since then many advances have been made, a very comprehensive timeline is available here. While several notable discoveries have been made in the field of immunotherapy over the years, it is really the collective efforts of scientists working across many disciplines that have made the current breakthroughs possible. Knowledge and equipment within the biological sciences and all scientific fields is constantly improving. For example, without the recent advances in DNA sequencing technology and the availability of powerful computers and software, we could not do many of the things that are taken for granted today. An example is the ability to sequence and analyze the human genome, this has been critical in our ability to understand and treat cancer.

The increasing interest in immunotherapy is being driven by encouraging data from clinical trials. Among the most important trials is one that was undertaken at the Seattle Children’s hospital in which 91% of patients with relapsed leukemia experienced complete remissions. The form of immunotherapy used in this trial is known as adoptive T cell transfer (the version using chimeric antigen receptors (CARs)) and this result demonstrated proof of principle for this approach in treating cancer. There is still work to be done to get immunotherapy to work as well for other cancer types, but this is happening now and breakthroughs will undoubtedly continue to take place. Now that working examples of immunotherapy are available, incremental improvements can take place, which should ultimately lead to very effective therapeutics. This is analogous in some ways to building the first airplane; The legend of Icarus illustrates how humans throughout the ages have wanted to fly, but the equipment and know-how were not available. Once the Wright brothers demonstrated a way in 1903, improvements were made very quickly. We are on the cusp of a new era in the Biomedical Sciences, cancer is curable and it’s starting to happen.

WHAT TYPES OF IMMUNOTHERAPY ARE WE MOST INTERESTED IN?

We are interested in using approaches with curative potential, that have the best chance of working and that can be profitable for our investor/s. There are many things to be considered and each approach has its own benefits and drawbacks. We have expertise in adoptive T cell transfer approaches (CARs and TCRs), vaccines and oncolytic viruses. These are very powerful approaches to fighting cancer which we believe will be among the most transformational in the coming years. However, all of the approaches have value and as new therapeutics pass through clinical trials, the most effective cancer treatment strategies will likely involve the use of a combination of several approaches.

WHAT ARE THE BENEFITS OF IMMUNOTHERAPY?

We believe that there are many benefits to immunotherapy for cancer and its use will continue to grow. Here’s why:

Simply put, cancer immunotherapy makes sense. The immune system is already designed to attack and destroy cancer cells, it just needs a little help. There is still work to be done, but the various immunotherapy approaches provide the framework to do it.